21. Official Entreprenuclear Thanks to Rod Adams

I have said it before, but I will re-iterate it again, this blog wouldn't exist if Rod Adams didn't publish Atomic Insights. I might not even be the hard-core pro-nuclear person that I am today if not for Rod's blog. I might be a money-hungry, greedy, rent-seeking, future-mortgaging purveyor of something far less valuable to society than the ABUNDANT, CLEAN ENERGY that peaceful nuclear power provides (already!).

Some would call Rod or I propagandists or worse, but the simple fact is that we recognize that future generations DESERVE to (and CAN, w/ nuclear) have access to the levels of energy that have been enjoyed by those of us in the period from around 1970 until today. We have been lucky enough to enjoy the wonders of modern electric appliances which save time that would otherwise have to be spent washing clothes or dishes or engaging in some task requiring inordinately more man-power than is needed with the use of electric tools. We get to enjoy HVAC (the topic of most of my senior design project for my Bachelors in Mechanical Engineering) which has allowed all sorts of people to enjoy living in places such as Texas, Arizona, or the American Southeast that were practically unbearable places to live prior to electricity-powered refrigeration cycles.

Without increasing Peaceful Nuclear Energy's overall primary energy market share up to 15-20% by 2040 from its present level of roughly 4.88% (see page 41 of this and divide 599.3 MTOe for nuclear by 12,274.6 MTOe total), this world (our only presently livable one) will be less pleasant to live in than today and in quite a few ways. Constrained fossil fuel resources are already either directly fought over, or the security of their transport necessitates protection by the NUCLEAR-POWERED U.S. Navy (especially the submarines and the 11 aircraft carriers) patrolling the Strait of Hormuz. Conflict over these limited resources will almost certainly increase with added imbalances between available supply and inevitable demand.

Despite all the claimed wonders of fracking for natural gas and the possibility (which has already been demonstrated in North Dakota) that some lessons learned from that practice can be translated to petroleum extraction,  there is still going to be FAR AND AWAY insufficient petroleum to satisfy the demand sure to be present from both the already-developed and the quickly-developing world (particularly the BRIC countries: Brazil, Russia, India, and China). China and India by themselves will soon have 2.5 BILLION people that would love to have even 25% the level of access to energy that the mere 300 million-ish Americans (even the lowliest of us) enjoys. Can anyone make anything close to a rational argument that Americans should have any more right to access to energy than Chinese or Indian people (please, don't even try).

The math is simple. Nuclear energy is a necessity. Without sufficient access to economical sources of energy, technological progression is virtually an impossibility. No technologically progression equals one of only 2 possibilities:
1. Declining in overall quality of life as the human race
-or-
2. Major reductions of human population (morally reprehensible, as far as I am concerned) .

Another morally reprehensible side of the nuclear power debate is all of the disingenuous people who grossly exaggerate the risk of their fantasized nuclear power plant accidents (which are generally detached from the realities of the laws of physics). Such people do mankind a major disservice. One of the worst of this kind is "Dr." Helen Caldicott. I put Dr. in parentheses in her case due to my strong suspicion that she has not actually treated a patient as a physician maybe anytime within my lifetime (spanning from the mid-1980's until today). I did happen to see the following funny meme of a picture of her today though. 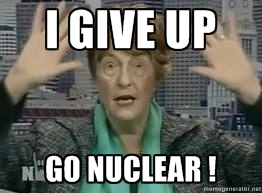 And in case you are curious, Rod, your plug gave my site traffic a bump of about 550 views above the recent baseline level with me never finding time to post. Around 600 total views in under 20 hours thanks to the plug is not too bad. I still wish my check for having this blog would come in (tongue-in-cheek).
Posted by EntrepreNuke at 10:48 PM 1 comment:

20. Congrats to Entergy and Grand Gulf on the Uprate

From the grapevine, I have heard that Grand Gulf Unit 1 within the past 48 hours has achieved its new 100% power output of greater than 1,440 MWe Net. Way to go to everyone that was involved in that project.
I am disappointed that Entergy hasn't put out any kind of press release related to this impressive achievement. If I am not mistaken, this places Grand Gulf neck-and-neck with Sweden's Oskarshamn Unit 3 as the 2 HIGHEST capacity operational nuclear power units in the ENTIRE WORLD. Is that not worthy of at least 1 little press release bragging about such an accomplishment?

When I heard that Grand Gulf had finally ramped all the way up, I had the thought that that might have put them into the top spot worldwide, since no EPRs have come online quite yet. I looked over this list from wikipedia, and Oskarshamn 3 was the only one that jumped out at me as being in the same ballpark. If I am mistaken, someone please let me know in the comments.

Here is an article about some lessons learned related to Oskarshamn's uprate project.

If you achieved something that was right at being #1 in the world, wouldn't you be inclined to brag about it a little?
Posted by EntrepreNuke at 10:07 PM No comments: