Up-front Warning, this post will include a humorous video courtesy of Andy Samberg's "The Lonely Island" (which also features Maroon 5's Adam Levine). Skip ahead and scroll down to watch that if you don't care all that much about reading how I tie it into Nuclear Power. Now, on to your completely irregularly-scheduled Entreprenuclear blogging.

Earlier this week, I read this excellent piece written by Dr. Robert Hargraves (author of Thorium: Energy Cheaper than Coal) regarding how opposition to nuclear power approaches superstition. There is no point in me re-hashing that post here, so just go read it.

HERE is an even bigger link to it. (note the interesting list of publications at the end that chose not to publish it)

On a very similar note, not too long ago on Forbes, this article from Jim Conca described how the risks of low-level radiation are so small that they get lost among all other background risk factors. I also recommend reading this article if you haven't yet and get a chance.

Now for the embedded funny video, which I will then (hopefully sufficiently) relate to the gist of this posting, in case it is somehow non-obvious to anyone who might read this.

Oh, in case you're reading my blog somewhere that is not conducive to watching the video embedded above, I will describe it for you. The video is from the group The Lonely Island and features Maroon 5's Adam Levine (also one of the judges on "The Voice"). If you are familiar with The Lonely Island, their videos have often been featured on the highly popular show Saturday Night Live, often simply referred to as SNL. The song is titled YOLO, which stands for "You Only Live Once". The song and music video accomplish what I found to be an outstanding job of poking fun at the idea of people being excessively risk averse in stark contrast to the presently-popular "YOLO" mantra (the battle cry of a generation, per this song).

The song starts off with the lyric "This life is a precious gift, so don't get too crazy, it's not worth the risk." Lonely Island then takes this absurdity of risk aversion to the extreme by suggesting such things as you should pull out all your teeth to avoid biting your tongue and that you shouldn't go to loud clubs because it is bad for your ears. It suggests burying all your money in your backyard, never traveling anywhere by any mode of transportation, and wearing a titanium suit in case a piano might fall on you. Basically, nothing in life is 100% safe, and to actually live a life worth living, taking risks is an absolute necessity.

Most people probably wouldn't immediately think so, but fears of low-level radiation from nuclear power are every bit as outlandish as the risk aversion that The Lonely Island parodies in "YOLO". The reason that might not seem to be the case for many people is that people have been systematically taught over the course of decades to have outlandish fears of radiation (even at levels below detectable/discernible impacts). Here is a graphic from IDigUMining.com of the ACTUAL numbers for how safe various sources of energy are. 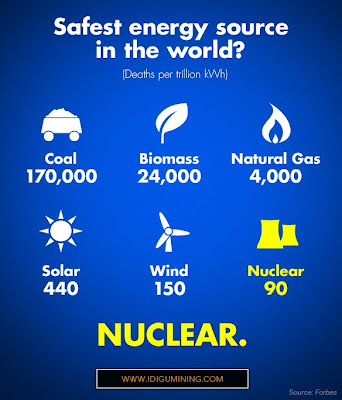 Risks from low-level radiation are minuscule (also sometimes spelled miniscule), to the extent that they get lost in the statistical noise. Risks of having insufficient energy are much, MUCH greater.

The total production capacity of the worldwide economy is limited by the amount of useful energy available to be used. To attempt to claim otherwise would be a losing battle. People currently living in poverty in the world could best be brought out of their poverty by having sufficient access to clean and reliable energy. Having more energy at a person's command gives them the opportunity to more access to clean water and to sufficient food. Energy also gives people sufficient freed up time doing more than merely surviving the day that they can become educated, and even pursue leisure activities.

Regardless of possible anthropogenic global warming impacts from CO2 emissions, I absolutely don't believe that the world has sufficient quantities of easily accessible fossil fuels to pull the existing population of impoverished people out of their poverty. Therefore, as inhabitants of planet Earth, we need to increase the percentage of our energy that is derived from peaceful atomic/nuclear sources.

To be afraid of nuclear power or to be anti-nuclear because of nuclear power's risks, when viewed in light of the risks that would be presented by insufficient access to energy, is equivalent to the absurdity of cutting out your teeth to avoid the risk of biting your tongue.

YOLO - You Only Live Once, preferably not in Energy Poverty
Posted by EntrepreNuke at 2:30 AM